A big congratulations to InfoSeeking’s own Jiqun Liu, a first-year doctoral student whose paper, “Towards a Unified Model of Human Information Behavior: An Equilibrium Perspective,” was accepted by the prestigious Journal of Documentation!

So what is the Journal of Documentation, anyway? A collection of people’s diaries? Not quite. In InfoSeeking-land (and academia, more generally) we strive to have our work accepted for publication in peer-reviewed journals, or those serial publications that’s submissions are reviewed by respected members of a certain field. And when it comes to information science, the Journal of Documentation is about as good as it gets. It’s one of the longest-running information science publications and boasts a particular focus on theories and concepts.

Out of the many submissions sent to this journal, Jiqun’s was selected. How? Well, first he had to do his research. With this paper, Jiqun aimed to build a unified model of human information behavior (HIB) for integrating classical constructs and reformulating the structure of HIB theory. Sounds simple, right? HA. Essentially, Jiqun used a complex theory, known as the “equilibrium perspective,” to construct a new framework for HIB. And with this new framework, other scholars–perhaps even some InfoSeekers and Jiqun himself!–will be able to explore HIB from new, exciting perspectives. This is an intriguing possibility in information science, and the Journal of Documentation‘s reviewers agreed, because they accepted Jiqun’s paper!

This is a tangible example of how InfoSeekers innovate and shape the wider information science field. Keep an eye out for Jiqun’s article, which will be formally published in August.

“Conflict is not inevitable, but disarmament is” – Tony Blair

In 2001 Wallensteen, & Sollenberg defined an armed conflict as a contested incompatibility that concerned a government and/or territory where the use of armed force between two parties, of which at least one was the government of a state, resulted in at least 25 battle-related deaths. However, thanks to the rapid evolution of the nature of conflicts, the above definition and most of our conception and previous studies of armed conflicts are rapidly becoming outdated. For example, their root cause is gradually shifting from territorial gains to other, far more pressing agendas such as gaining control of valuable natural resources including water, energy supplies, sources of rare earth minerals, etc. In this post, I will tell you a bit about armed conflicts and related research, and what myself and some other lab members are doing to contribute to conflicts’ end.

In the early 1970s, environmental issues emerged on the international political agenda. Since then there has been mounting concern that environmental disruption is likely to increase the number of disputes originating from competition for scarce resources (Gleditsch, 1998). Former Norwegian Defense Minister Johan Jørgen Holt (1989) echoed this idea when he cautioned the world that environmental stress was likely to become an increasingly potent contributing factor to major conflicts between nations.

However, that doesn’t mean that territorial claim has entirely lost its potency in terms of its contribution to the conflicts. Recently, economic zones have escalated the territorial conflicts. Disputes occur between countries in close proximity to the sea where tiny islands can sometimes assume monumental national interest because of their consequences for controlling maritime shipping lanes. For example, there are no less than six claimants to all or part of the Spratly Islands in the South China Sea (Denoon & Brams, 1997), where the use of force anytime cannot be ruled out.

Beyond motivations behind armed conflicts, the nature of war is also changing. For example, the last decade saw a major increase in the number of prolonged civil wars as opposed to short-term border skirmishes. Iraq and Syria provide prime examples. According to Syrian Observatory for Human Rights, Syria, facing probably the worst civil war crisis in centuries, has already witnessed at least 321,358 casualties since the war began in March 2011.

In 2003, Richard Smalley identified war as the sixth (of ten) biggest problem facing humanity for the next fifty years. War usually results in significant deterioration of infrastructure and the ecosystem, a decrease in social spending, famine, large-scale emigration from the war zone and often the mistreatment of prisoners of war or civilians.

Still more disturbing is the fact that those who suffer most in wars are often children, who comprise our next generation. Taking note of the continuously degrading lives of children in war-torn countries, the then UN chief Ban Ki Moon opened the Security Council’s debate on children and armed conflict in August 2016 with, “In places such as Iraq, Nigeria, Somalia, South Sudan, Syria and Yemen, children suffer through a living hell.” 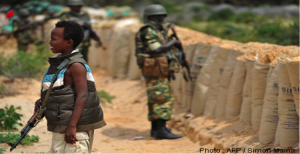 (Picture: France is mobilized on the issue of protection of children in armed conflicts. Credit: AFP/Simon Maina)

This is our effort to mitigate the chances of future conflicts by analyzing the characteristics of current world conflicts and studying their evolution from the historical data of previous violence, with the aim to predict what might cause future warfare. For example, we would like to gather information concerning how long conflicts last, casualties and factors contributing to conflicts’ initiation and end. We would like to draw correlations between types of countries, religion, types of parties in conflict, casualties, etc. A preliminary version of the analysis is already available at this link.

Once again, the InfoSeekers experienced great success at an international conference! Last week, many lab members traveled to Oslo, Norway for CHIIR 2017. Mortals may call it the annual Conference on Human Information Interaction & Retrieval.

It was a chilly week, but that didn’t stop anyone from doing what they do best: having fun with their research! Manasa Rath, Yiwei Wang, Shawan Sarkar and Jiqun Liu presented posters, while Long Lee presented a paper on Community Question & Answering services. 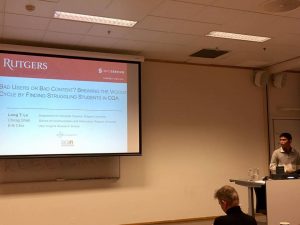 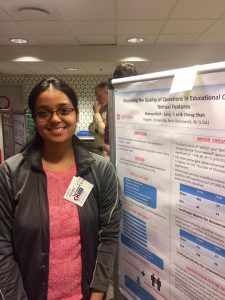 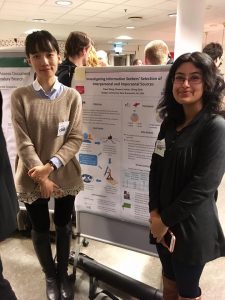 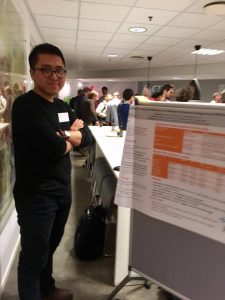 But it wasn’t all work and no play! Participants were able to enjoy a wonderful banquet with a rather scenic backdrop and even visit the Nobel Peace Center. 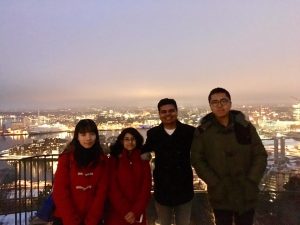 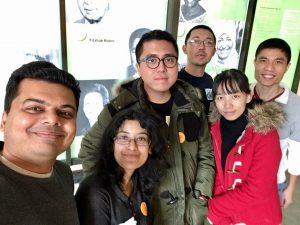 All in all, it was a conference well-spent! And guess what? Seekers won’t have to travel far for CHIIR 2018…it’s happening right in New Brunswick! 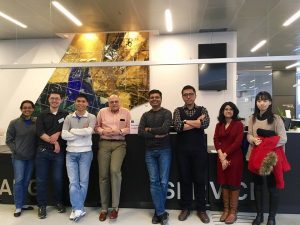 Are you a researcher or graduate student looking for an introduction to a new field in information science, or a developer or system designer interested in building interactive information retrieval systems or social/community-driven interfaces? Do you simply have a passion for hot topics in information science? Then have we got a surprise for you!

InfoSeeking’s fearless leader, Dr. Chirag Shah, has authored Social Information Seeking: Leveraging the Wisdom of the Crowd, a new book that summarizes his work on social information seeking (SIS), and at the same time serves as an introduction to the topic. 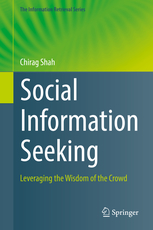 What is “social information seeking,” you may ask? It is a relatively new area of study concerned with the seeking and acquiring of information from social spaces on the Internet. It involves studying situations, motivations, and methods involved in seeking and sharing of information in participatory online social sites, such as Yahoo! Answers, WikiAnswers, and Twitter, as well as building systems for supporting such activities.

Want to find out more or preorder your copy? Visit Amazon or the Springer site!