In 2007, Chirag Shah drove himself cross-country, from Chapel Hill, N.C. to Mountain View, Calif., stopping en route not only to gas up and get coffee but to use his laptop to tweak the online tool he was creating that would soon launch in time to capture and preserve hundreds of 2008 presidential election campaign videos from YouTube for posterity. This tool was and is ContextMiner, an open-source Web service at ContextMiner.org, which harvests the contextual information around a digital object.

Beyond metadata, which is static information, contextual information is dynamic and includes, — for instance, if you’re capturing a video on YouTube — ratings and comments, providing a richer context for understanding the situation and time in which a video was created. 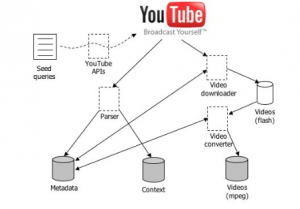 On Public Television’s (PBS) “Antiques Roadshow,” for instance, an object (painting, vase, desk) that is brought in for evaluation is considered infinitely more valuable if the owner has contextual information, such as letters or documents, that help place the object in history. The ten-year anniversary of ContextMiner provides an opportunity to retell the story and alert potential users (librarians, archivists, scientists) of the free service for curating digital information. This includes information around videos as well as the collecting of visuals and other digital objects, just as books and documents have been collected for centuries.

The Project was originally funded by the National Science Foundation (NSF), and over the years its continued support has been through grants and donations brought by Dr. Shah.

ContextMiner won the prestigious Best Political Science Software Award from the American Political Science Association. It has been used by nearly 2,000 people and organizations, who have collected millions of social media objects and associated metadata/context such as comments, view-counts, and links. ContextMiner has been featured in several magazines and conferences, and used by many scholars, students, and professionals in their pursuit of solutions for socio-political issues by mining social media data.

Here’s to the next ten years of ContextMiner! Try it for yourself at http://contextminer.org.

If you will be attending ASIS&T in Washington DC at the end of this month, plan to attend sessions with fellow InfoSeekers faculty and students presenting new research. And you won’t want to miss the fun party on Monday evening! Sessions begin Saturday morning, October 28 and run through Wednesday morning, November 1.

9:30pm Party With The Professors

Sunday, October 29th at 9:30pm: Party with the Professors

Last week our very own Dongho Choi successfully defended his dissertation, “A Study of Information Seeking Behavior: Investigating Exploratory Behavior in Physical & Online Spaces” in front of a demanding panel of fellow scholars.

Dongho’s dissertation investigates individuals’ behaviors during online and physical search tasks to identify their behavioral patterns. He gathered data from 31 participants whose behavior during web search and physical search tasks was collected via eye-tracker, web browser and wearable video recorder. His analysis suggests that individuals have preferred searching strategies that they adopt in different tasks and environments. He found that the behavioral pattern, however, was affected by the task type and the way information is structured in the environments.

Chirag Shah said, “Dongho has been an invaluable member of InfoSeeking Lab over the past four years. He worked on an NSF-funded project for social media, and a Google-funded project for sensor-based information seeking. Time flies, and I can’t believe it’s already time for Dongho to fly away! Congratulations to Dr. Choi for the successful defense of his dissertation. My best wishes to him and his family for the next chapter of their lives.”